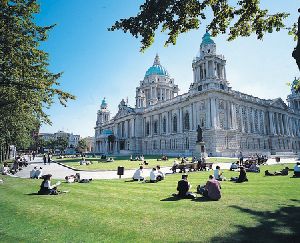 Belfast is the capital city of Northern Ireland, a place with an amazing variety of landscapes, cultural attractions and leisure opportunities as well as an intriguing - and famously complex - history. Within a few hours of Belfast, one can visit pre-Christian burial sites, coastlines of legend and famous cathedrals.

Belfast boasts an impressive architectural heritage: from the proud City Hall in the heart of the city, to the beautifully restored carved stone and ironwork of St. George's Market near the waterfront, and the elegant Linen Hall Library with its priceless collection of books. It is also home to the world's oldest aircraft production company, the Titanic was built here,  and it’s where the tractor and the tyre were created.

The city has undergone a metamorphosis in recent years: the mighty £100 million Odyssey complex, the Waterfront Hall, new galleries, new public and private developments are all part of the transformation.  But the people are as warm and witty as ever, and city pubs like the Crown Liquor Saloon in Great Victoria Street still buzz with the friendliness and humour of the city's residents.

And did you know that Belfast is said (by The British Council) to have the lowest cost of living in the UK ? It has been voted one of the top 10 cities on the rise (Lonely Planet Blue List) and is considered the second safest city in the world behind Tokyo (United Nations). In 2009 leading travel guide publisher Frommer's named Belfast as one of its top 12 world travel destinations.