Our Executive Council member Professor Wangui wa Goro is the recipient of the 2021 Flora Nwapa Society Award. Read more about her thoughts on translation in an interview with IATIS President Professor Loredana Polezzi. 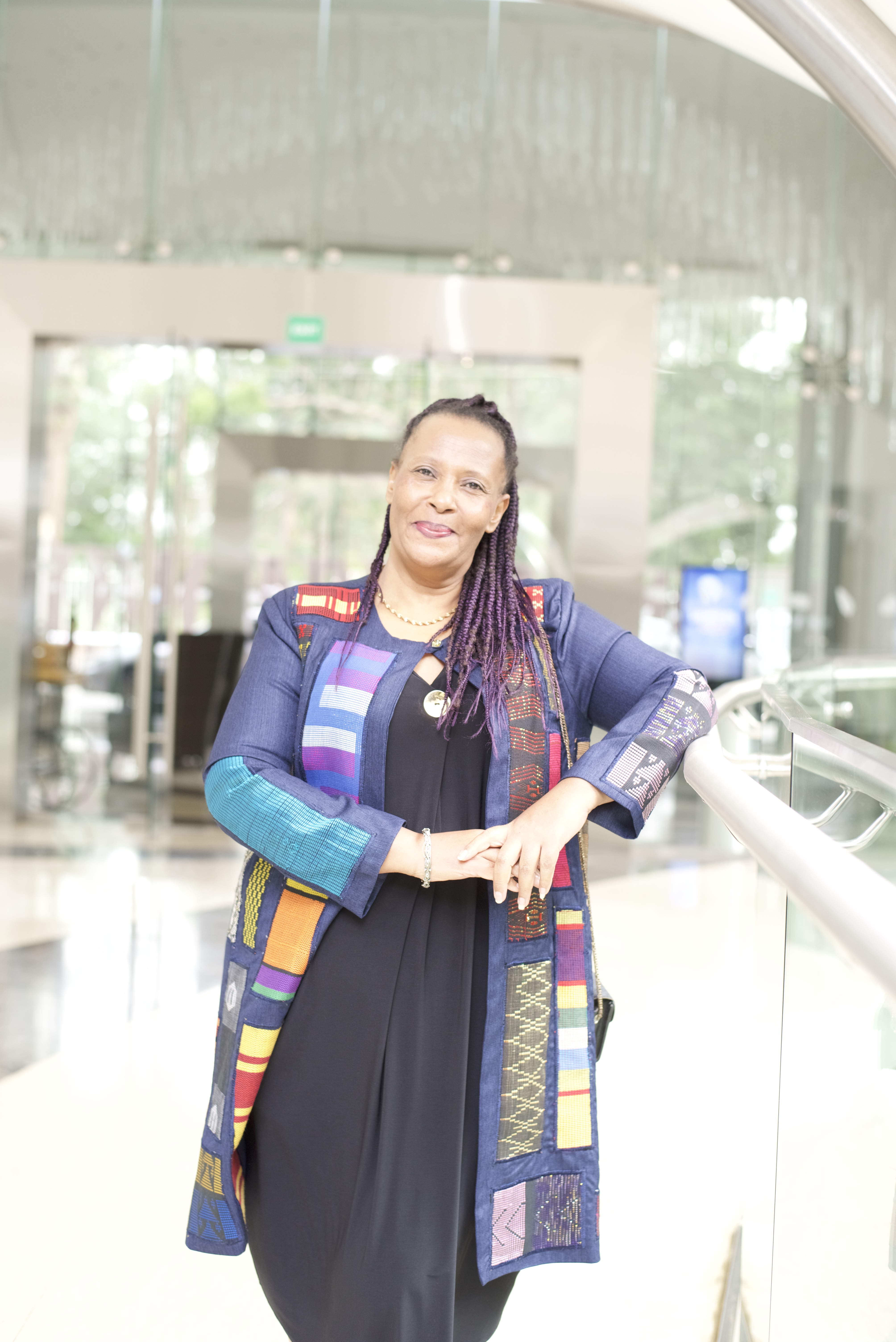 Professor Wangui wa Goro has enjoyed a multidisciplinary life, spent over forty years as a public intellectual and she has spoken extensively in many parts of the world on a wide range of issues.
She is a widely acclaimed translator and translation theorist, writer, poet, academic, cultural curator, and editor with a great passion for languages, literature and intersectional freedom.  She considers herself an ambassador and advocate for human, social, political and cultural rights and enjoys working with young people. Her friends consider her “the quintessential transnational global Pan African, feminist Afropolitan”, which, though she finds hilarious, she relishes. Her theoretical work explores intersectionality from African feminist perspectives and her work has appeared in a number of publications. A key publication Global Feminist Politics, Identities in a Changing World, co-edited with Suki Ali and Kelly Coate (Routledge 2001) is a relevant highlight as is her work on power and ethics in translation. Her recent creative work (poems) has appeared in several anthologies including Red, edited by Kwame Dawes and more recently, the highly acclaimed New Daughters of Africa edited by Margaret Busby. She is well known for her translations of writers such as Ngugi’s wa Thiong’o’s earlier work and Veronique Tadjo’s work, As the Crow Flies (from French), among other translations in and across African literatures, including works from French, Italian, Kiswahili and Gikuyu. She has increasingly turned to translating into Gikuyu. Other creative works include: “Heaven and Earth” in A Half a Day and Other Stories (MacMillan), Ayebia Clarke (ed.) and “Deep Sea Fishing”, edited by Ama Ata Aidoo (Ayebia) which appeared in the award-winning African Love Stories. She is passionate about promoting African literary translation world-wide, an activity which she conducts via Africa in Translation (AiT), run through SIDENSI. She currently holds honorary Professorships at the School of Oriental and African Studies (SOAS), is a Visiting Professor at the University of London (King’s College London), and also holds an honorary position at UNISA.

How did you become involved in translating and in translation studies -- and do you see them as separate or connected activities?

I became aware of translation and interpretation as a child. Kenya is a multilingual and multicultural society, so I was crisscrossing language all day and daily. All day, in that there were radio and television broadcasts in Kiswahili and English, that we spoke Gikuyu at home and went to school in English.  I also spent a long time at the Alliance Française in Nairobi, borrowing books and music, attending events, and just hanging around the place during my teenage years watching films or chatting to other people who liked languages.  I was also learning French formally at school and was part of the Kiswahili debating society because I was good at debating, and this improved my Kiswahili.

I also grew up not far from UNEP (the United Nations Environment Programme), and some of the staff there came from my family and community, and they would talk about the work and the interaction of languages such as French and English at the conferences.  I heard the words interpreter and translator early in my life, and because the people were so cool, this really fascinated me, and I declared that this was what I was going to be when I grew up!  I started articulating my preferred career as a linguist at an early age. Kenya is also a conference hub, and that is where I worked later, immediately after leaving school, especially after having learned French to my “A” levels and discovered that languages were lucrative!  That us how my journey into translation began, and then I studied “Modern” Languages in Europe.

What is the role of translation in African contexts today? How important is it and how has it changed?

As I said above about my own identity, translation/interpretation are a way of life for many Africans, as “switching” languages is the norm.  I don’t even think now of this as switching languages, but we function naturally across languages as a way of private and public life.  For instance, if I am at home with my mother and a non-Gikuyu speaker enters the room, we switch automatically into Kiswahili.  In urban and more cosmopolitan areas and social groups, the assumed language is English and the street language and language amongst workers is Kiswahili.  I have also lived in different parts of the world now, mainly away from my mother tongue and national language, Kiswahili, so cannot imagine my life otherwise.  More formally, the recognition of translation is gaining greater importance, as the world is increasingly global and many Africans are transnational, for positive and negative reasons.  So, this currency of translation is drawing greater attention, particularly through the presence of international bodies and foreign companies in countries.  The importance of languages through the internet is also palpable and unavoidable… where translation tools are in greater availability and have improved with the improving technology. Africa has also declared the importance of languages in the next 50 years, so the promotion of translation is implicated and implied.

I love the adventure of crossing linguistic borders.  I also think that language practitioners are cool people as they have travelled culturally and are more likely to be open minded, although you will find some purists.  Additionally, the interculturalism, intersectionality and multiculturalism I have experienced throughout my life, both in cultural work, my lived experience and activism, inform and are informed by my work as a feminist translator, and particularly as a practitioner, scholar, and theorist – and this is exciting.  I have also been fortunate to serve on public policy and academic networks in different parts of the world and experienced this cutting edge and passion alongside my peers.  We often talk about the joys and perils of translation, including in our practical work.  I was also fortunate to have pioneered literary translation Studies in the UK, alongside some of the leading scholars in the world, and was among the first students in this new discipline. I have also been a pioneer in the African Scholarly field, particularly African and Africana Literary Translation.  So, I have seen the evolution of our sector, as a personal but also as a scholarly and cultural phenomenon, in different parts of the world, so it is practically my life.  More recently, I have been working professionally in the language sector in an international bilingual organization, so I am intricately intertwined with this passion of ours.

On a more personal level, I engage as a literary translator across three main languages, including my current work on translating into Gikuyu from Kiswahili and European classical texts in French and Italian, where I experience the loneliness and solitude of the translator. Hopefully our associations can change that, by continuing to build networks and resources for collective work and individual support.

It is a charming and charmed life, is all I can say.